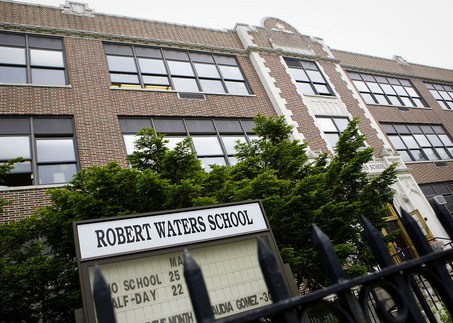 A Little bit of History

Moving slightly ahead historically, Richard Hanna served as principal for 14 years, during his tenure a 3-story extension was completed in 1973. Under his direction the enrollment of the school reached 1,125 students in grades kindergarten through eighth.

Stanley Sanger would serve as principal for the next 17 years. Under his leadership, a second 3-story addition was added to the 27th Street side of the existing structure in 1998.

The present structure houses almost 1300 students and now includes pre-kindergarten to eighth grade students. It is presently under the principalship of Bruce Naszimento, a Union City Native.

Robert Waters School has been named to the New Jersey and National Registers under Historic Sites Inventory No. 0910-T3 as of September 1992, recorded by Meridith Arms Bzdak's of the Sullebarger Associates Organization. According to Bzdak's report "Union City's Public school buildings are well preserved and well maintained examples of the civic facilities that were constructed in response to the area's rapid growth at the turn of the century. They represent several architectural styles and were constructed by local architects who were typically German and Irish immigrants. "